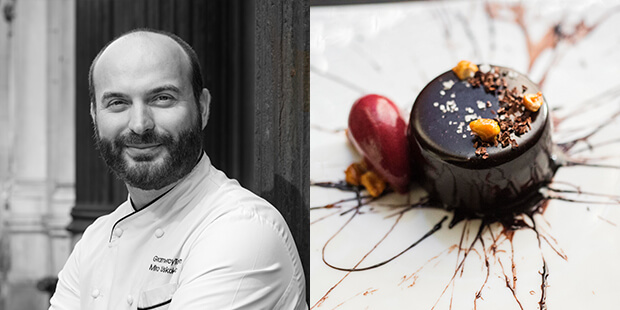 In this innovative class, Chef Miro Uskokovic of Gramercy Tavern, a Michelin starred restaurant in NYC, will share his insights into using alternative sugars and explore various options that lend unique flavors and textures to your baking and pastry making. You will learn how to utilize alternative ingredients in place of more conventional ones and discover their complexities, how to use them properly, and what their possibilities and limitations are. Chef Uskokovic will arm you with the right information to challenge yourself to incorporate these sugars in your dessert repertoire.

The cost to enroll includes a digital class recipe book, an apron, and a chocolate gift box, as well as access to an online forum to share ideas and discuss the content from the class, before, during, and after it has ended. Students need to register at least 4 business days before the class to receive the chocolate on time. Each student will receive a diploma to certify completion of the course. All classes will be conducted via Microsoft Teams.

Chef Miro Uskokovic is known for his contemporary American desserts that are inspired by a collection of personal memories and experiences, as well as influences from other cuisines. Uskokovic was born and raised in small-town called Vrbas in Serbia. He grew up on his family farm, where his mother had a small cheese and cake-making operation. At seventeen, he came to the United States for the first time as part of a high school exchange program in Greentown, Indiana. After returning home to Serbia, Uskokovic attended Hospitality College in Novi Sad. In 2006, he went back to Indiana, where he nurtured his love of baking, working with Pastry Chef Andrea Kirkpatrick in her shop, Pastry Diva, known for
modern American cakes. In 2008, Uskokovic enrolled in The Culinary Institute of America, where he received an associate’s degree in the culinary program in early 2010. While completing his externship in the savory kitchen at Wallsé, Chef Kurt Gutenbrunner’s flagship restaurant, he met Johnny Luzzini, pastry chef at Jean- Georges, who offered him the opportunity to train as his production intern during his days off. After completing his program at the CIA, Uskokovic returned to Jean Georges as a pastry cook. Within a year and a half, he became the pastry sous chef at Jean-Georges, working first under Luzzini and later Pastry Chef Joseph Murphy. After his time at Jean-Georges, Uskokovic took the position of pastry chef for Aldea, Chef George Mendes’ Flatiron restaurant. In the fall of 2013, Uskokovic became the pastry chef at Gramercy Tavern, and in the spring of 2015, he took on the role of pastry chef for the new Untitled restaurant at the Whitney Museum. Since then, he has been recognized by Dessert Professional Magazine, who named him one of the Top Ten Pastry Chefs in North America in 2015, as well as other media outlets, such as Saveur, Bon Appétit, Bake from Scratch, New York Magazine, Life and Thyme, and Eater, just to name a few. His desserts were praised in both the Untitled and Gramercy Tavern New York Times reviews by Pete Wells. In 2020, he was named a finalist in the Outstanding Pastry Chef category by the James Beard Foundation.

Online Class Cancellation Policy:
As this is an online class, we apologize that we are unable to issue a refund for the class. If you miss the class, we will send you a recorded video of the course and you will be able to ask questions by e-mail to our Chef.