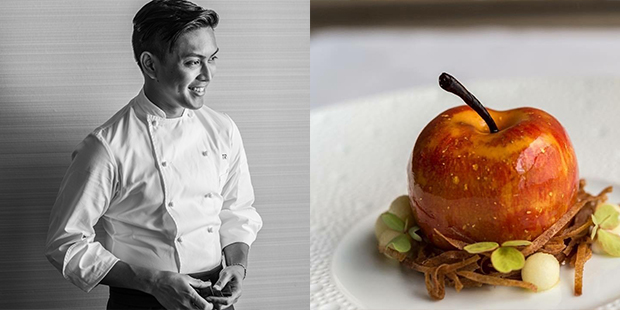 As the executive pastry chef for three Michelin-starred restaurant, Le Bernardin, Thomas Raquel creates modern, seasonal plated desserts rooted in classic technique that complement the cuisine of chef Eric Ripert. He brings his singular touch to Le Bernardin’s dessert menu, calling upon his experience, travels and dedication to create pastries with universal appeal that are at once simple, beautiful, and delicious. Join Chef Raquel for a look inside the inspiration and techniques behind three of his most iconic creations, including the famous Apple and Citrus plated desserts, as well as a classic chocolate canelé. Chef Raquel will answer your questions and share his expertise in vibrant and unique flavor combinations with a sleek presentation.

The cost to enroll includes a digital class recipe book, an apron, and a chocolate gift box, as well as access to an online forum to share ideas and discuss the content from the class, before, during, and after it has ended. Students need to register at least 4 business days before the class to receive the chocolate on time. Each student will receive a diploma to certify completion of the course. All classes will be conducted via Microsoft Teams.

Chef Thomas Raquel grew up in the Philippines and Los Angeles, learning how to cook from his Filipino grandmother. He had planned to be a doctor, but after graduating from high school at the early age of 16, he took a weekend cooking class and decided to enroll in the California School of Culinary Arts before committing to study medicine. As a student, Raquel was often placed in the pastry section, where he was quickly drawn to the precision and delicate nature of the craft. After working at Los Angeles restaurants such as Lucques, AOC and The Water Grill, as well as Wolfgang Puck Catering, he graduated from culinary school eager to embark on his career as a professional. He then traveled to Paris, where he staged at the acclaimed Pierre Hermé
patisserie. In 2008, Raquel accepted a pastry position at L2O in Chicago, where Chef Laurent Gras had a strong influence on him, driving his discipline and helping him hone his style of bridging modern elements with time-honored technique. Four years later, he became the pastry chef of Chicago’s Acadia, a two Michelin-starred restaurant, which allowed him to create a menu all his own and further fine-tune his approach. Raquel’s work has earned him a number of prestigious accolades, including a Jean Banchet award for Rising Pastry Chef of the Year in 2014 and a place on Dessert Professional Magazine’s list of the 10 best pastry chefs in 2015. Raquel’s desserts are influenced by his experience, travels, and dedication to seasonality.

Online Class Cancellation Policy:
As this is an online class, we apologize that we are unable to issue a refund for the class. If you miss the class, we will send you a recorded video of the course and you will be able to ask questions by e-mail to our Chef.