Chocolate often requires tempering before it is used.

Tempering gives your chocolate a desirable glossy appearance and is necessary to create the perfect ‘snap’. If you don’t temper, chocolate may appear dull, matte, or may have uneven coloration. Without tempering chocolate could also become soft to the bite.

To learn how to temper, view our video HERE

Tempering chocolate involves putting it through a cycle of temperatures (heating, cooling, resting) to align the cocoa butter crystals within the chocolate. Once aligned, through temperature agitation, the chocolate will have the familiar snap and shine. The simplest method to tempering is known as "seeding", in which small pieces of unmelted chocolate are added to melted chocolate.

Begin by melting the chocolate using the recommended guidelines for melting chocolate. You will need the following:

Now you are ready for the final step in the process. The temperature of the chocolate now needs to be raised to its working temperature:

If you used the microwave method, slowly reheat, at 10 second intervals (at half power), while checking the temperature and stirring, at each interval, until the desired working temperature is reached.

To be sure your chocolate is now in temper, dip the tip of a clean, dry knife in the bowl and allow it to stand for a couple of minutes. If it is correctly tempered, the chocolate on the knife tip will begin to reach a nice hard, shiny state.

Now you have successfully tempered chocolate and can start your creation! 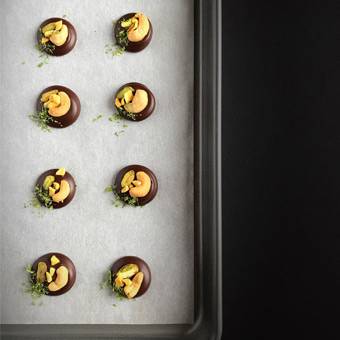 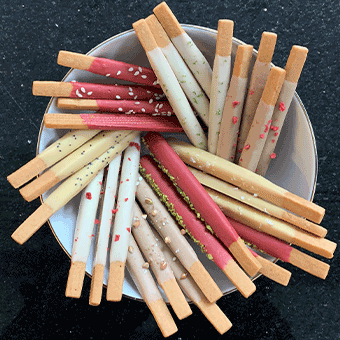