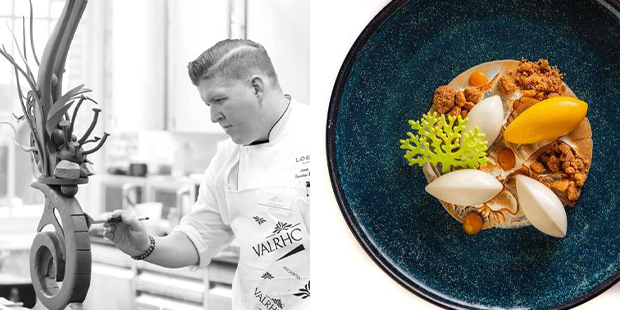 THIS CLASS IS OPEN TO ALL SKILL LEVELS

Recorded Session: To purchase, in lieu of the live session, students can purchase the class recording. $35 for the recorded session. Students will also receive a discount code for 20% off your next purchase on our online boutique.

Class includes: Live Session: Class recipe book and a 20% discount code for our online boutique will be sent the Friday before class starts. All live sessions feature the opportunity to ask questions via chat box throughout the class and additional time is set aside at the end of class for a Q&A session. The class recording will be sent the day after class. Recorded Session: Class recipe book and recording will be sent within 24 business hours (weekdays, 9am-5pm) of class purchase. Students will also receive a discount code for 20% off your next purchase on our online boutique. In lieu of a Q&A session at the end of class, students can email ecolebrooklyn@valrhona.com with any questions pertaining to the class material.

Note: For customers located in Puerto Rico and countries other than the United States please email ecolebrooklyn@valrhona.com to sign up and pay for the class.

We are thrilled to welcome Executive Pastry Chef of the Seminole Hard Rock Hotel & Casino Hollywood, Jason Morale, for his first online class at l’Ecole Valrhona Brooklyn! With his extensive experience working in high end hotels, Chef Morale will share his techniques for designing plated desserts. Learn how to create plated desserts with different textures, flavor contrasts, and elegant presentations. Chef Morlae will show you how to create recipes and utilize techniques to build several different plates focusing on complimentary components.

While many children spent Saturday mornings riding their bicycles around the neighborhood, Jason Morale was riding shotgun in his father’s delivery truck dropping off produce at all of the major supermarkets and restaurants in town. Growing up with an entrepreneurial dad in the produce businesses, meant that Jason had the rare opportunity to interact with a variety of chefs and receive an informal education in the importance of fresh ingredients. Without realizing it, Jason entered the first stage in a career that would take him from delivery boy to accomplished pastry chef. In 1996 at 16 years old, Jason gave up his seat in his father’s truck and accepted a part-time position working at a Publix bakery while attending high school. Jason’s responsibilities included everything from kneading dough & baking traditional baguettes to piping icing on birthday cakes and meticulously adding chocolate edging to Italian cannolis. He developed a love for the sweeter side of cooking, which inspired him to enroll in a special culinary vocational program designed for high school students to hone their cooking skills learning from expert chefs. Following the successful completion of the program and high school graduation, Jason continued his culinary education attending Johnson and Wales University in 1998, during which time he was selected to travel overseas to receive on the job training in Eastern European Pastry technique at Do & Co International Catering Company based in Vienna, Austria. Jason learned to make traditional European delicacies including marzipan based cakes, ice creams and sorbets while working across Austria & Germany. Jason received his first taste of fine dining while helping to assist in the creation of a seasonal dessert menu for Hass House, a 5-star restaurant associated to the catering company in the heart of Vienna. In November 2001, Jason returned to the United States to complete his education and begin work as the dining room pastry chef at The Ritz-Carlton Golf Resort in Naples. In 2003, Jason graduated with an Associate’s degree in culinary arts, baking and pastry arts and within months accepted a chef de partie position at The Ritz-Carlton, San Francisco. In the mornings, he would supervise a small pastry team ensuring the highest quality dessert items were served at banquet events and the VIP club level for the 5-diamond hotel as well as a focus on the four food and beverage outlets. By night, Jason created special desserts and cakes for the hundreds of elaborate weddings taking place on property. Within one year, Jason returned to south Florida to become the chef de partie at The Ritz-Carlton, South Beach, creating menus for the exclusive club level lounge, VIP amenities and wedding cakes. In August 2005, Jason accepted his first lead role as head pastry chef with Wish, a chic upscale eatery recognized by Conde Nast Traveler as one of 50 Best New restaurants in the world. Jason hand-crafted all the dessert menus for the restaurant and banquet events, created specialty wedding cakes, amenities and show-pieces and participated in a number of high profile events and competitions including preparing an elaborate dessert for a James beard dinner in New York City. In 2007, Jason left Wish to work as the assistant pastry chef at the 4-star, 5-diamond, Four Seasons in Houston, Texas. While in Texas Jason had the opportunity to taskforce at The Four Season Nevis, a small island in the West Indies only 36 square miles large. Jason learned how to make it work, when the supply ship only comes once a week you hope your full order made it on board. Two years later in 2009, he joined the culinary team as the Executive Pastry Chef at the 5-star, 5-diamond Four Seasons in Palm Beach. With wedding cake features in Palm Beach Weddings Illustrated as well as a strong focus on daily in house fresh baked breads & viennoiserie. In 2011, Jason then returned to South Florida to The Ritz-Carlton, South Beach this time as the executive pastry chef. In 2014 wanting & looking for new challenges Jason left the hotel industry to become executive pastry chef for Samba Brands Management, focusing on Miami staple Sugarcane and Italian fine dining eatery Bocce in Miami’s midtown district. With the freedom that comes with independent restaurants Chef Morale experimented with new platting styles & techniques. Creating new and exciting plated desserts as well as infusing sweet and savory into his dishes. With the desire to expand his knowledge and push boundaries in 2016 chef Jason joined Chef José Andrés Think Food Group as Executive Pastry Chef of The Bazaar by José Andrés at SLS hotel Miami Beach, one of the trendiest restaurants in Miami. With a new focus on Spanish gastronomy Chef Morale experimented with new techniques helping to create fun interactive dining experience for his guest. Inspired by the work of chef José Andrés’ humanitarian outreach, Chef Morale lovingly fed hundreds of Miami’s less fortunate at Camillus House via local grassroots group, Recipes for Change. In 2018 Chef Jason Morale joined the Loews Miami Beach Hotel as Executive Pastry Chef spearheading all Pastry aspects of the iconic 790-room, oceanfront resort with 6 outlets and banquets. Chef Jason has participated in the South Beach Wine & Food Festival for the 4th year in a row collaborating on spectacular dining events including the Tribute Dinner, Tacos after Dark & Southern Brunch. Now ready to take on his biggest Challenge to date, armed with extensive training, exceptional talent, and passion for creating one-of-a-kind pastries, Chef Jason can now be found at the Seminole Hard Rock Hotel & Casino in Hollywood FL. As Executive Pastry Chef he oversees all aspects of baking & pastry production for up to 10 different outlets, 3000 guest rooms and a special event space of up to 6000 guests.

Cancellation Policy: As this is an online class, we apologize that we are unable to issue a refund for the class. If you miss the class, we will send you a recorded video of the course and you will be able to ask questions by e-mail to our Chef.